Start a Wiki
Nicholas Alexandrovich Romanov is the former Emperor of Russia and deceased father of the Grand Duchess Anastasia, Olga, Tatiana, Maria, and Alexei.

Nicholas has brown hair, brown eyes (blue in real life) and thick eyebrows. He has a short beard with a mustache. Since he occupied the highest position in Russia during that time, he was always seen with an elegant suit, which was composed with a white shirt that had a thick blue sash (from his right shoulder to his left hip). On each shoulder he has a fringe, from which a tiny and thin chain hangs on the right hand side. He has black belt and boots and has red trousers with a thin yellow line at its extremes.

He is first seen along with his wife, Alexandra, in the music box that his mother Dowager Empress Marie was carrying before entering to the Romanov's Palace. He was assassinated along with his wife, three elder daughters and only son by Grigori Rasputin's army of rebels. However, his youngest daughter, Anastasia, escaped the assassination with her grandmother, Marie.

In the prologue (beginning of the movie) in a dream , he shows his love for Anastasia as the two were dancing and he picked her up.

According to Vladimir, he would have to be stern with Anastasia sometimes and gave her a look when she had to behave. 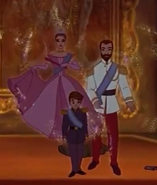 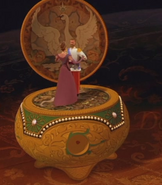 Nicholas II's and Alexandra's figures in the musical box

Add a photo to this gallery
Retrieved from "https://foxsanastasia.fandom.com/wiki/Tsar_Nicholas_II?oldid=7345"
Community content is available under CC-BY-SA unless otherwise noted.